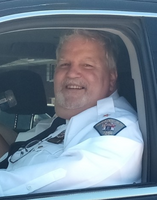 Jackson, Mark, age 63, a 32 year resident of New Milford, passed suddenly on Wednesday July 27, 2022. Raised in Palisades Park, NJ Mark was the former Chief of Police of the Palisades Park Police Department. He was actively involved in numerous law enforcement associations throughout the state. A former semi-pro football player for the Brooklyn Kings and the NJ Rams, he was an avid Giants fan as well. Mark was an outdoorsman and thoroughly enjoyed hunting.

Devoted husband of 32 years of Kathleen (nee: Malloy). Loving father of Jan Jackson and Christopher Moran. Dear brother of Curtis (Jennifer) and Matthew (Donna) Jackson. Adored uncle of many nieces and nephews. Cherished cousin of many. He will be truly missed by his faithful companions London and the late Missy.

The family will receive their friends on Saturday July 30th 12-4 pm at the Frank A. Patti and Kenneth Mikatarian Funeral Home 327 Main Street "opposite the Fort Lee Library". For condolences, directions, or information (201) 944-0100 or www.frankpatti.com