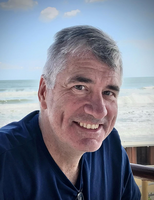 Maurer, Mark age 60, of Mahwah NJ, formerly of Palisades Park, passed away on Wednesday December 21, 2022. He was most recently self-employed as a financial consultant in the areas of commercial financing and capital acquisition.  Mark was well respected in his field and prior to being self-employed, he worked at various financial institutions holding many positions throughout his career including Sr. VP, First VP, and Executive VP.

A memorial mass to celebrate Mark’s life will be held on Saturday, January 7, 2023, at St. Joseph Roman Catholic Church in Oradell, NJ at 10:00AM.  If so desired, donations may be made to the American Diabetes Association or the Alzheimer's Association.