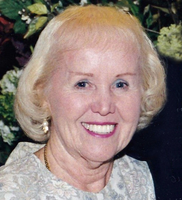 Ford, Maureen Agnes nee: Walsh, age 94, a lifetime resident of Fort Lee, on Sunday January 8, 2023. She was born in Fort Lee, NJ and was a Homemaker. Beloved wife of the late Martin Ford. Devoted mother of Maureen Russo and her husband Frank, Martin Ford and his wife Huei-Tsi, Brian Ford and his wife Anne, Timothy Ford and his wife Lori, John Ford and his wife Judith and the late Terence Michael Ford. Cherished grandmother of Ian, Kelsey, Connor, Erin, Meg, Julie, Kara, Jamie, John, and Laura. Dear sister of Josephine, Grace and the late Margaret, Katherine, Madeline, and Thomas. The family will receive their friends on Wednesday 3:00 – 8:00 PM at the Frank A. Patti and Kenneth Mikatarian Funeral Home 327 Main Street "opposite the Fort Lee Library". The funeral will leave Thursday at for the celebration of her funeral mass in the Historic Madonna R.C. Church On The Hill at 11:00 AM. For condolences, directions, or information call (201) 944-0100 or www.frankpatti.com