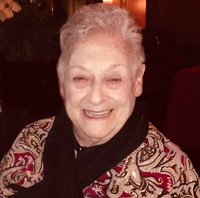 On July 31, 2020, Raquel Funes de Grinberg died at the age of 95, surrounded by her three sons who were her world. Her death dealt a great blow to her children, her grandchildren, her nieces and cousins, and all who knew her. Raquel studied Architecture at the University of Buenos Aires until she was forced to discontinue due to the repressive policies of the dictatorship of Juan Peron. In December 1945, Raquel married Dr. Raul Grinberg, who died in 2012. In 1960, Raquel and her three young sons emigrated from Argentina to join her husband, already in the U.S. conducting cancer research at Columbia University’s Presbyterian Medical Center in Manhattan. The family settled in Leonia, NJ, where Raquel lived for the rest of her life. She divorced her husband in 1963 and never remarried. Raquel devoted her life to raising her three sons whom she loved with all her heart, and contributed greatly to their professional success with her love and support . They are George Grinberg-Funes, Esq., Ricardo Grinberg-Funes, DrPH, MSPH, and Diego Grinberg-Funes, MD. Raquel worked in various professional areas throughout her life -- as a fashion model, Spanish composition consultant, court interpreter, and translator. She particularly enjoyed the time she spent as a long-term substitute teacher, teaching Spanish at Leonia High School. She is remembered fondly by her students today, who still appreciate her teaching style. She had the uncanny ability to identify with her students and the youth of her community. She welcomed them into her home, where they would talk and laugh together. Throughout her life, Raquel shared the strength and determination of her beloved father, Jacobo Funes,who grew up in a Sephardic Jewish community in Turkey. In the early 1900s, at the age of 13 and without a penny in his pocket, Jacobo emigrated alone to Argentina. He became a successful tailor and businessman and brought his mother and three brothers from Turkey to Argentina. He also became a founding member of the small Jewish community in Buenos Aires. There Jacobo met Raquel’s mother,Dora (Lefcovich), who also was a constant source of love and support throughout her life. In 2000, Raquel unexpectedly lost her younger sister, Anita Soler (Funes), who also had emigrated to the U.S. from Argentina in the late 1970s with her husband, Max Soler. A lawyer in Argentina, Max went on to pursue an artistic career in the New York Metropolitan area. Raquel is survived by her three sons, George, Ricardo, and Diego; George’s wife, Susan Jacob; Ricardo’s wife, June Bodansky; her five grandchildren, Jansen, Allison, Ashley, Lauren, and Mathew; her two great-grandchildren, Landon and Adley; her Aunt, Inge Lefcovich; her nieces, Nora Pozzi and Andrea Soler; her great-nephew, Julian Pozzi; her cousins, Julia Zabalegui (Funes), Jose Funes, Ruth Cortes (Funes), Roberto Aisenson, Diana Aisenson, Silvina Lichtmann (Aisenson), Alicia Arendar,Eduardo Funes, Cristina Chejfec (Funes), Ricardo Funes, Mickey Lefcovich, Bobby Lefcovich, Ruth Herman (Lefcovich) and Mark Lefcovich. Most of all, Raquel was proudest of being the mother of her three sons. She considered her children to be her greatest achievement. She was appreciated by many from all walks of life --regardless of age -- for her heart, her soul, her "joie de vivre", and will be missed for her kindness, generosity, and for the love of her family. A memorial will be held at a future date. In lieu of flowers, donations can be made in her name to: St. Jude Children's Research Hospital,CancerCare and/or Jewish Family & Children's Services of Northern NJ (JFCS)