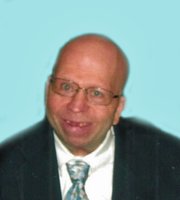 Thomas John Sokol Leonia - Tom Sokol was born in Walnut Creek, California on September 1,1961. He resided in Berkeley, California until his parents John and Betty Sokol moved to Leonia, New Jersey. He attended Leonia public schools until he was seven and then attended Bergen Center for Child Development. When he was 13, he transferred to Rhinebeck Country School in Rhinebeck, New York. At age 20, he moved to Woods Services in Langhorne, Pennsylvania, where he lived until his death on March 18, 2021. Tom is survived by his mother Betty, his brother Stephen and his cousins Tony and Anna Baldessari. The family will receive their friends on Friday from 4-6pm at the Frank A. Patti and Kenneth Mikatarian Funeral Home 327 Main Street "opposite the Fort Lee Library". The celebration of his funeral mass is on Saturday in St. John's R. C. Church, Leonia at 10:30am. The family requests that in lieu of flowers, donations be made in his memory to Woods Services, c/o Development Office, P.O Box 36, Langhorne, PA 19047: Woods.org. For condolences, directions, or information www.frankpatti.com or call (201) 944-0100.