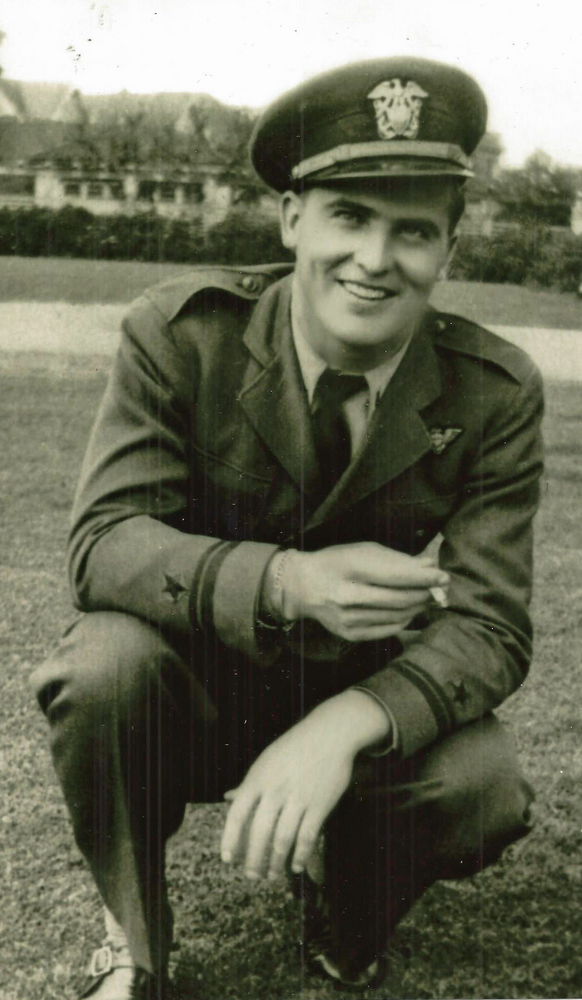 Born 4/22/24 in Palisades Park, New Jersey. The youngest of five sons of William and Laurie Davidson. All five sons volunteered for military service during World War II during which two of them lost their lives. He graduated from Leonia High School where he played football. Following high school, he joined the United States Navy, and after training he was commissioned and received his pilot’s wings. He survived ditching one airplane in the Atlantic Ocean and another in the Pacific Ocean. At the age of 20 he was flying Curtiss Helldivers in combat off of the aircraft carrier USS Intrepid and was one of the pilots who sank the Japanese battleship Yamato. He was awarded the Air Medal, Silver Star, and the Navy Cross. At the end of World War II he remained in the Navy flying four engine planes from Hawaii to California and Guam until 1946 when he enrolled at The College of William and Mary. While there he married Christine Albonese, a marriage that lasted for over 70 years until her passing in 2019. Graduating from college with a BS degree, he worked as a state parole officer in Richmond, VA, before joining the FBI as a Special Agent, a career that lasted 30 years. Assigned to the Indianapolis and Pittsburgh offices, he worked a variety of cases until transferring to the New York City office. While assigned to the New York Office he worked in the Soviet counterintelligence division and was involved in every major case involving Soviet espionage. After retirement he participated in the investigation and inspection of the Conrail Police Department, the appointment of Secretary of Labor Ray Donovan, and the Soviet shoot-down of a Korean airliner. Living in Leonia for over 60 years he was an active member of the Leonia Sports Boosters, was appointed to the Leonia Board of Ethics, and a member of the Vestry at All Saints Episcopal Church. He loved gardening, hunting, golf and fishing. Beloved husband of the late Christine Davidson. Devoted father of James Davidson, Jr and his wife Barbara, Jeanne Booth and her husband Aubrey, and Barbara Davis and her husband John. Cherished grandfather of Spencer Davidson and his wife Nicole, Travis Davidson and his wife Linn, Matthew Booth, Katie Davis and her fiancé Chris Altimari, Allison Terry-Booth and her wife Samantha, Amanda Davis, Kyle Davis and the late Laura Christine Davis. Adored great grandfather of Grant Anders Davidson and Erik James Davidson.

The family will receive their friends on Monday from 5-8 pm at the Frank Patti and Kenneth Mikatarian Funeral Home 327 Main Street “opposite the Fort Lee library”.  All are asked to assemble Tuesday 11 am in All Saints Episcopal Church (Leonia) for funeral services.  In Lieu of flowers, please consider a donation to a charity of your choice.  For further information, call (201) 944-0100 or visit www.frankpatti.com