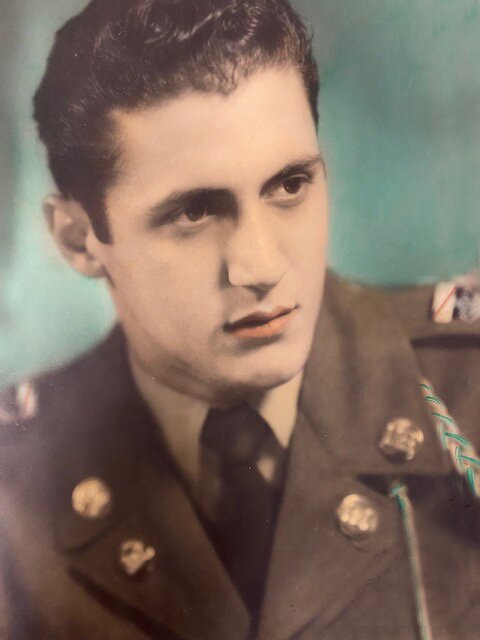 Fort Lee. NJ/Louisville, KY— Angelo DiSanto, a long-time resident of Fort Lee, NJ, died Christmas morning, December 25th, 2021, in Baptist Hospital, in Louisville, KY. He was surrounded by family in his last hours, when he was called to the Lord. He was the youngest of the DiSanto sons born to his parent's Battista John DiSanto and Concetta DiSanto. He was born on February 19, 1929, in the family home located in West New York, NJ. The family eventually moved to Fort Lee, NJ to the house on Glen Road that was to be home to Angelo along with his 7 sisters and 3 brothers. (Rose, Mildred, Josephine, Anthony, Beatrice, Vincent, Sam, Marie, Gloria, Sylvia)

He left high school in 1948 to join the US Army. Angelo, a U.S. veteran, earned the rank of sergeant while serving in what he called the "best job in the army" as a cook. That passion never left him as Angelo enjoyed preparing and cooking meals for friends and family at home or the Fort Lee V.F.W., where he was a "life member".

Angelo had a very successful career in the structural steel industry as a  layout man in the fabrication of beams, and stairs for construction projects. Always immensely proud of his work and its attention to detail, those attributes did not go unnoticed by his children.

He is best remembered as someone that loved meeting new people, socializing, and finding common ground in their backgrounds. The consummate storyteller and card player, he had the anecdotes that always kept the conversation flowing that was never outdone by his hearty laugh.

Angelo is survived by two of his sisters, Marie and Sylvia as well his two sons, John, and Richard DiSanto, his Daughters- In -Law Kathy DiSanto and Alice DiSanto, along with his four grandchildren, John DiSanto, Jr., Kristin DiSanto, Craig DiSanto, and Ben DiSanto.

In lieu of flowers, the family requests any donations be made to the Deborah Heart Center located at 200 Trenton Rd, Browns Mills, NJ 08015.

Share Your Memory of
Angelo
Upload Your Memory View All Memories
Be the first to upload a memory!
Share A Memory