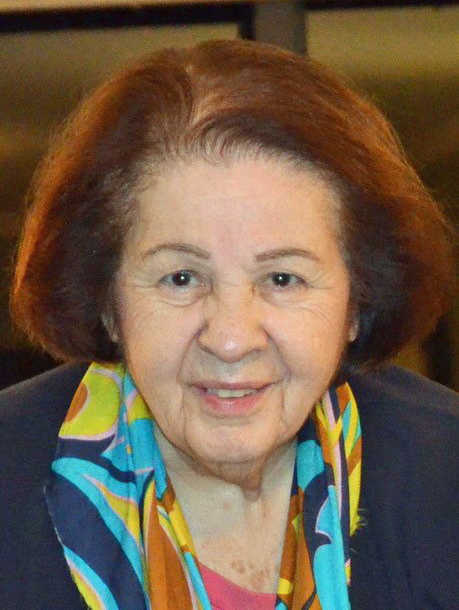 Born on May 1, 1931, in humble surroundings in Athens, Greece, Catherine Venetis was the eldest of six children. She was affectionately known as “Ketie” to her family and friends.  Her father, Yiannis Kananis, was a civil servant and her mother, Alexandra (Moutsopoulos), a housekeeper.    Catherine’s determination, work ethic and can-do attitude was evident as a teenager. Following her father’s tragic death when Catherine was sixteen, she began working as a seamstress to help support her mother and younger brothers. She excelled at her craft and later became the head dressmaker at a well-known women’s couture shop in Athens. She continued to work in that field after emigrating to the US, including as a senior dressmaker in the late 1960’s at several couture design houses.

Catherine met Louis Venetis in 1947 in Athens when both were attending an amateur talent show at an outdoor theater close to their respective homes. After a courtship of nearly eight years— lengthened by Louis’s travels as an officer in the Greek merchant marine—they were married at Agios Panteleimon Church in Athens on October 10, 1955.  Shortly thereafter, the newlyweds moved into an apartment in central Athens in a building owned by Louis’s father. Catherine would sometimes note that the young couple’s early days of marriage were lonely ones since Louis’s work forced him to be away for long stretches of time.  In fact, when their only child, Peter, was born in 1957, Catherine labored with her mother at her side since Louis was at sea, unable to be with her.  Due to Louis’s work with several oil tanker companies, however, in 1959, the young family was able to spend the year living together in Abadan, Iran. Despite the challenges of those early days of marriage, Catherine and Louis were married nearly sixty-seven years.

Motivated both by the prospect of charting a better life for their family and by the desire to be free from the separation that Louis’s career with the merchant marine forced on them, Catherine and Louis made the difficult choice to leave their beloved homeland of Greece and move to the United States with their young son, Peter. They settled in Jersey City, New Jersey, where they lived for 25 years before moving to Fort Lee, New Jersey. During Catherine’s time in Jersey City, she was a member of both Greek Orthodox churches in the town, Evangelismos and Saint Demetrios. She was especially active within the church community throughout the course of her son’s secondary school years.

Given the attention to detail and precision that was required by her profession as a dressmaker, Catherine developed high standards and a keen eye for the aesthetic. She appreciated superior craftsmanship and had an inherent fashion sense. Admitting that she didn't know a thing about cooking as a young bride, her skills in the kitchen eventually became legendary among friends and family.  Her avgolemono soup and keftedes were second to none and were always in high demand at family gatherings and holidays. Catherine loved movies and had a special fondness for musicals. She also reluctantly confessed to having a soft spot for The Days of Our Lives, the popular daytime soap. Always up for a lively debate with her husband or friends, she enjoyed keeping current with politics in the US and in Greece.  Perhaps most especially, Catherine was vivacious, kind and loved to laugh.  With a robust sense of humor and a quick wit, she enjoyed being teased and was always ready to respond in kind.

Born with an innate curiosity and desire to learn, Catherine relished traveling and exploring new places. From early on in their relationship, she and Louis took every opportunity to journey throughout their native Greece and across the European continent. Often traveling by car, with Louis behind the wheel, Catherine would act as chief navigator, soaking in different cultures and historic sites along the way.  She viewed their trips not only as adventures but also as educational opportunities for herself, her husband, and—most importantly—for their son, Peter. On several occasions, Catherine’s brother Nicos accompanied them on these excursions. She loved the Greek islands and especially delighted in the physical beauty and the traditions of her husband’s native island of Karpathos.    Without a doubt, Catherine’s overriding love was her family, for which she was a fierce champion.  She devoted her life to her husband and to her son and his family.  She derived immense joy from being a mother and took the lead in raising her son, especially in his early years when her husband was away at sea. She was unflinching during difficult times and her overall resolve lightened the burden on her husband and provided for a loving and comfortable childhood for her son. She was enormously proud of her grandson, Elias, and showered him with love and encouragement at every chance. She was fond of saying “my grandson is my son twice over.”

The funeral services will be held on Thursday morning at 11AM at St. John The Theologian Cathedral in Tenafly, NJ.  In lieu of flowers, contributions in memory of Catherine may be made to Trustees of Columbia University (with “Dr. Mathew Maurer’s Cardiac Research” indicated in the memo), or alternatively a charity of the donor’s choice.

Share Your Memory of
Catherine
Upload Your Memory View All Memories
Be the first to upload a memory!
Share A Memory