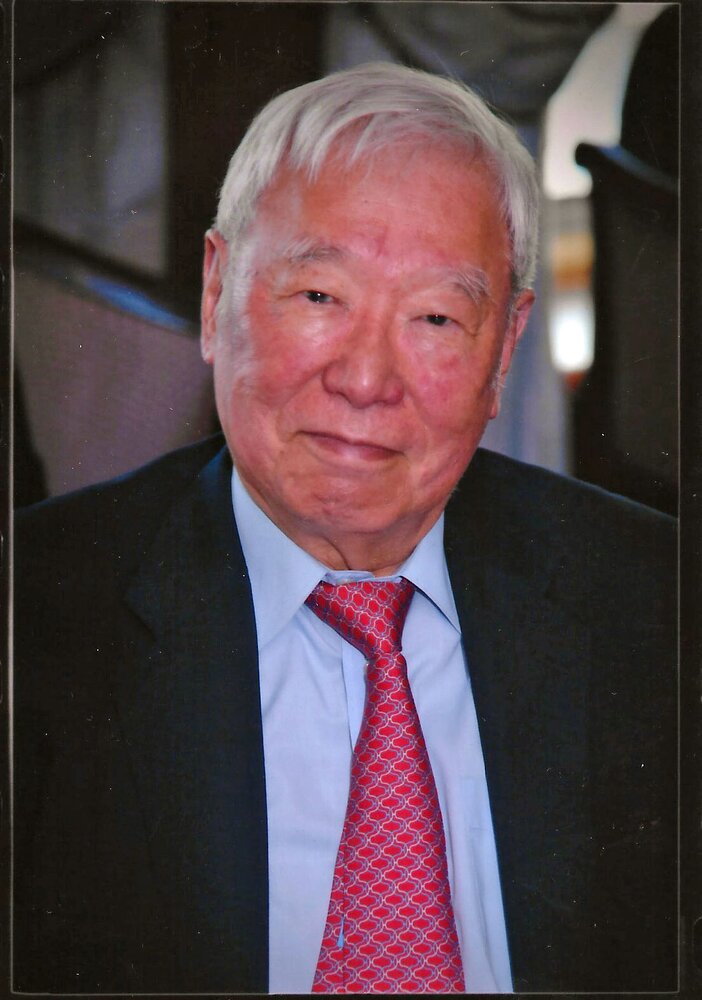 Peter Fan, beloved husband of Frances and father to Robert and Annabel, died on June 7th at his home in New Jersey. He was 87. Dr. Fan was born in Yangchow, China on February 28, 1935. He was educated in England and immigrated to the United States where he worked as a general surgeon at Hackensack University Medical Center in New Jersey for more than 35 years. He specialized in laparoscopic surgery, with sub-specialties in plastic surgery, burns, trauma, and proctology. He was also a patented inventor of surgical instruments.

As a young boy during the Japanese invasion of China, he travelled from Nanjing, Yangchow and Chongqing, nearly losing his life on several occasions, before he was safely reunited with his family. Throughout his life he considered himself to be fortunate to have escaped and survived his calamitous journey through China.  After his family was together again, his father was then sent by the Nationalist government to work at the Chinese Embassy in London. His family immigrated to the UK in 1948 and he spent his formative years in London. In 1952, his parents started the Chinese Church in London which to this day continues to flourish with multiple locations throughout London.

It was in London where Dr. Fan received his secondary education. He accidentally met another Chinese student on Oxford Street in London, who suggested he apply to St. John’s College, Oxford. He was accepted and became the second Chinese ever to study medicine at Oxford. Dr. Fan became a Fellow of the Royal College of Surgeons of England.

He met and married his loving wife Frances in London. They were together for over 62 years. Their son Robert and daughter Annabel were both born in London.  In 1969, the family immigrated to the U.S. and Dr. Fan worked first as a surgical resident at Boston University Hospital. After one year, he transferred to Hackensack Hospital, and two years later upon completion of the residency, in 1972, he entered into private surgical practice for 35 years.  As Hackensack Hospital grew into Hackensack University Medical Center, Dr. Fan made use of his multiple skills acquired in England and in America. Because of the initial lack of sub-specialists in Hackensack, Dr. Fan was obligated to participate in many sub-specialties, including multiple trauma, burns, facial injuries, hand surgery, minor plastic surgery, proctology, gynecology, etc.

Dr. Fan was an avid innovator and a tinkerer.  On March 26, 1990, he performed the first laparoscopic gall bladder removal in New Jersey, which was published in the Bergen Record. He became a local leader in this new field, and subsequently became the Chief of the Laparoscopic Section.  He invented and patented an instrument that replaced the expensive laser for this procedure.  This instrument is still widely used today.   He continued to invent new surgical instruments even in retirement and held a total of 10 patents.  He was the initial driving force in establishing the Center for Advanced Laparoscopic Surgery in Hackensack.  At the age of 67, he formed an advanced laparoscopic group specializing in laparoscopic obesity surgery, whilst he himself concentrated on laparoscopic hernia repairs. He was a kind, gentle and fearless surgeon, who always put patients first.

Dr. Fan also served 10 years on the Board of Trustees of William Paterson University in Wayne, N.J. For this, he was awarded a Doctor of Science degree.

He was a life-long learner with a keen intellect. He had many hobbies, including keeping current with technology. In the early 70s, he learned to program and wrote his own software for a doctor’s office. His other hobbies included Mahjong, ballroom dancing, filing patents, inventing surgical instruments and arranging small group travels. Amongst his family and friends, Dr. Fan was widely respected and beloved for his generosity, kindness and spirit. He took a vested interest in everyone and was intentional about sharing his wealth of knowledge with those around him.

He is survived by his beautiful and devoted wife Frances, his son Robert, an orthopedic surgeon in Salem, Oregon, his daughter Annabel, a business executive in Manhattan, and 6 adoring grandchildren, Rachel, Katie, Peter, George, Audrey and Josie.

In lieu of flowers, please direct gifts in his honor to St. John's College via Americans for Oxford: