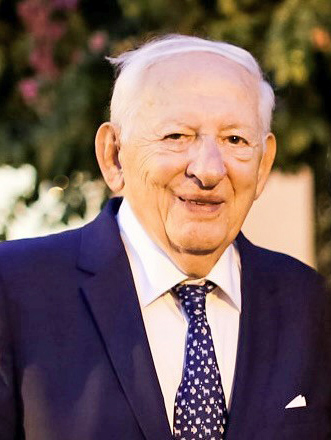 Vasilios Mikelis, aged 92, residing in Englewood Cliffs, New Jersey (formerly Fort Lee, Weehawken, and Manhattan, NY), passed away on October 28, 2022.  Predeceased by his father Stefanos, his brother Dimitrios, and his mother Paraskevi, Vasilios is survived by his loving wife Sotiria.  Vasilios was the devoted father of three daughters: Vivian and her husband Dimitrios, Catherine and her partner James, Stephanie and her husband Stefanos. He was the cherished grandfather of six grandchildren: Mary and her husband Erol, Niki, Nicholas, Nina, Alexander, and Sophia; and the great-grandfather of Sophie.

Vasilios was born in Ano, Lesinitsa in Northern Epirus on February 6, 1930.  In 1945, Vasilios escaped from communist Albania with his mother and brother.  Upon arriving in Ioannina, Greece, he attended high school at the Gymnasium Arenon.  On February 5, 1947, he migrated by boat to the United States of America, where he reunited with his father whom he had not seen since 1936.  In New York City, Vasilios continued his education at the George Washington High School and the City College of New York.  In 1952, he volunteered for the draft, and he served with distinction for the US Army as a Signal Support Systems Specialist in Germany and France.  After completing his military service, Vasilios and his brother began their successful journey as restaurant entrepreneurs in Union City, New Jersey.  On September 9, 1960, he married Sotiria Botsis in Ioannina, Greece and together they started a loving family in Weehawken, New Jersey. In the 1970s, together with his brother, they built and operated the Plaza Diner in Fort Lee and eventually the Royal Cliffs Diner in Englewood Cliffs. These thriving businesses became a vibrant part of the community.

Vasilios Mikelis was an active member of St. John the Theologian Church in Tenafly.  He was also a committed member of the Pyrrhus Benevolent Society, where he had various leadership roles including the presidency.  In 1986, he was elected President of the Panepirotic Federation of America, where he served with distinction for two years.  During that time, he traveled to Switzerland, London, Canada, Greece, and Australia; in Switzerland he addressed the United Nations, seeking justice and human rights for the people of Epirus.  Since 1993, Vasilios visited his village of birth several times and during those visits, he supported the reconstruction of the Panagia Church.  In 2013, Vasilios was recognized with the “Past President Service Award Honoree” by the Panepirotic Federation of America.

Vasilios was a charismatic, sociable, affectionate soul, and he derived great joy from spending time with his beloved family and friends. He will always be remembered for his generous spirit and his willingness to help others. Vasilios Mikelis lived an extraordinary life, and he will be deeply missed by all who knew and loved him.  Funeral Mass will be held on Monday, October 31, 2022 at  9:30 a.m. at the Metropolitan Cathedral St. John the Theologian, 353 E. Clinton Ave., Tenafly, NJ. Interment to follow at Fairview Cemetery.

Share Your Memory of
Vasilios
Upload Your Memory View All Memories
Be the first to upload a memory!
Share A Memory