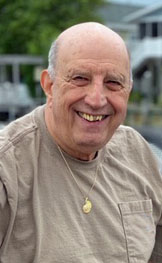 Surace, Joseph J. age 78 of Fort Lee on Wednesday February 17, 2021 a great voice was silenced. Born May 4,1942 in Englewood N.J. to the late Vincent & Louise (nee Marrone) Surace he was a lifetime resident of Fort Lee. Beloved husband of 50 years to Beverly Surace (nee Baranello). Devoted and loving father to daughter Louise Surace (Edward Meller) and son Vincent Surace (Elizabeth Stearns). Joe is also survived by his brother Louis Surace, his nieces Lisa Waxman (Steve Waxman) and Tara Denicolo (Llyod Denicolo). Great Uncle to Rachel & Eric Waxman, Jenna & Luke Denicolo, and his aunt Dominica Panetta (nee Surace). Joe had many friends and family such as his best friends "Pal" Jack & Jan Denichilo and his list of accomplishments and achievements in life were endless. Joe graduated from Holy Cross High School in 1960 he then went on to proudly serve his country in the United States Army from 1964-1966. After leaving the Army with an honorable discharge Joe became a manager for Food Fair. In 1968 Joe found his first love and true passion accounting when he went to work for Van Epps, Shipman & Heyliger CPA where he worked as an officer manager. He went back to school & graduated from St. Peter's College in Jersey City in 1971 earning a BS in Accounting. In 1974 he opened his own accounting firm "Joseph J. Surace Public Accounting" where he worked up until his death. Joe always said, "When you love what you do you never work a day in your life." He loved his clients & looked forward to tax season every year to sit down with them and catch up on how they were doing. He never worked a day in his life. His other greatest love in life was the Fort Lee Jr. Bridgeman Football Program where he made friends that he considered family. Forty-three years ago, Joe went to help a friend run the program after the first year his friend turned the program over to him where he remained president of the Jr. Bridgeman for 42 years until his death. His generosity of his time & love for his community did not end there he served on the Fort Lee Rent Leveling Board (1981), the Fort Lee Planning Board (1982-1993) and was chairman for the last two years of his term, the Fort Lee Housing Authority (1994-2018) Governor's Appointment chairman (1998-2000), the Fort Lee Board of Education (2003-2018) president in 2007 & 2009. He was also involved in Bi-County Jr. Scholastic Football as an officer from 1994 until his death and served as president from 2002-2005 and coached Fort Lee Little League Baseball (1984-1990). Joe was a parishioner of Holy Trinity Church in Fort Lee where he served as an usher for over 50 years. He was a member of New Jersey Association of Public Accountants Chapter - VP, National Society of Public Accountants, Pellegrina E. Cermida MAS - President 1975, Saint Rocco MAS - Honorary Member, UNICO charter member Fort Lee Chapter, VFW -Life Member, American Legion, Elks member for 30 years, & Fort Lee Chamber of Commerce - Outstanding Volunteer 2006. He may have never worked a day in his life, but he was always very, very busy. Do to COVID the family will have a private viewing on Monday 2/22/2021 from 9:30 AM -10:30 AM at Frank Patti and Kenneth Mikatarian Funeral Home 327 Main Street. The funeral will leave Monday at 10:30 AM for the celebration of his funeral mass in Holy Trinity R C Church at 11:00 AM. IN LIEU OF VISITATION the Surace family asks that you gather to pay your respects and honor Joe at 500 Stillwell Avenue, Fort Lee in front of the Dr. Alan W. Sugarman sports Complex Monday 2/22/2021 at 10:40 AM the funeral procession will pass by on the way to the Madonna mausoleum. As the funeral procession passes by cheer and blow your horns to say goodbye in the way Joe lived his life - Loud and Proud. The family would greatly appreciate it. They also ask that you wear a mask for everyone's safety. In lieu of flowers the family asks you send a donation to the Fort Lee Jr. Bridgeman Football Program or the Veterans Association. The Mass will be Zoomed, call a family member for the link. The Mass will be Zoomed, call a family member for the link. For condolences, directions, or information call (201) 944-0100 or www.frankpatti.com

Share Your Memory of
Joseph
Upload Your Memory View All Memories
Be the first to upload a memory!